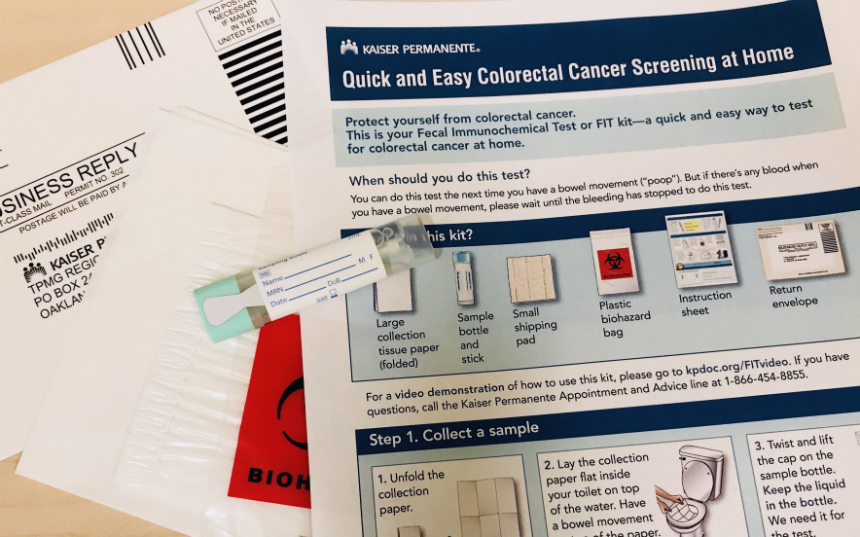 Study Focuses on Effectiveness of Population-based Screening in Northern California

Kaiser Permanente members in Northern California are 52 percent less likely to die from colorectal cancer since the health care organization launched a comprehensive, integrated screening program, according to a new study in the specialty’s top journal, Gastroenterology. 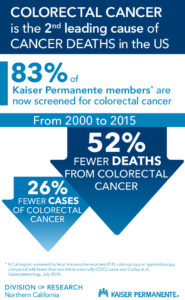 “Since we launched our screening program we have seen a remarkable decline in the number of cases of colorectal cancer and related deaths across a large, diverse population,” said gastroenterologist and co-lead author Theodore R. Levin, MD, clinical lead for colorectal cancer screening for The Permanente Medical Group (TPMG), which provides care to Kaiser Permanente patients and members in Northern California.

The study, “Effects of Organized Colorectal Cancer Screening on Cancer Incidence and Mortality in a Large, Community-based Population,” confirms that since Kaiser Permanente Norther California’s screening program for colorectal cancer was rolled out between 2006 and 2008, screening completion as recommended by the U.S. Preventive Services Task Force increased to 83 percent among those eligible (adults 50 to 75 years old) by 2015, compared to 66 percent nationally. In that same timeframe, new cases of colorectal cancer in the United States dropped 26 percent.

Researchers compared the periods before and after the organized Kaiser Permanente screening program was rolled out between 2006 and 2008. The study found that mortality from colorectal cancer decreased 52.4 percent from approximately 31 deaths to 15 deaths per 100,000 people; and the incidence fell 25.5 percent from approximately 96 cases to 71 cases per 100,000 people.

“This most recent study is the culmination of more than two decades of groundbreaking Kaiser Permanente research and clinical care initiatives. It provides evidence for dramatic improvements to colorectal cancer screening by having an organized approach to making sure people get screened,” said TPMG gastroenterologist and co-lead author Douglas A. Corley, MD, PhD.

Colorectal cancer is the second-leading cause of cancer deaths in the United States. The American Cancer Society estimates more than 140,000 new cases will be diagnosed in the nation this year, and it’s expected to cause more than 50,000 deaths during 2018.

After a positive fecal test or sigmoidoscopy, physicians order a colonoscopy, the procedure that examines the full colon and can remove polyps.

Drs. Levin and Corley, both research scientists with the Kaiser Permanente Northern California Division of Research, noted that Kaiser Permanente has conducted, and continues to conduct, critical research on all three of these methods, with important studies dating back to the 1980s.

“Colonoscopy has long been an effective screening tool for colorectal cancer, but it can be expensive and time-consuming to deliver in large populations, and many people are unwilling to undergo the test,” Dr. Levin said. “We have found that Kaiser Permanente members are more than willing to be screened with the FIT kit, which has greatly contributed to our high screening rates.”

An initial Kaiser Permanente research goal — led by James Allison, MD, FACP, an emeritus research scientist in the Division of Research — was to generate evidence that the guaiac-based fecal occult blood test and/or sigmoidoscopy conducted in large, average-risk populations could save lives and decrease the incidence of colorectal cancer.

The Division of Research conducted landmark studies on the use of flexible sigmoidoscopy, which began at Kaiser Permanente facilities in the mid-1990s; these studies formed the basis for U.S. Preventive Services Task Force guideline recommendations.

In 1996, Kaiser Permanente conducted the first U.S. study showing that FIT kits had superior performance characteristics to the fecal occult blood test. A 2007 study provided evidence used by the U.S. Preventive Services Task Force to recommend FITs as a screening option in their guidelines. And a recent multicenter study within Kaiser Permanente was the first large U.S. study to estimate the effectiveness of colonoscopy for reducing deaths from colorectal cancer. (Although colonoscopy is commonly used, it has not been studied in large, randomized trials.)

Within a few years of initiating its population-based screening program, Kaiser Permanente was able to dramatically increase its screening rates by mailing FIT kits to the homes of its Northern California members of recommended screening age, 50 to 75 years old; systematically reminding members when they are due for screening; and quickly processing a large volume of FITs — upwards of 3,000 per day — that are mailed directly to a Kaiser Permanente laboratory.

“Kaiser Permanente’s screening program for colorectal cancer in Northern California is a perfect example of how a large health care system can expertly use technology and data to create a program that promotes health, prevents illness and saves the lives of its members on an unprecedented scale,” said Yi-Fen Chen, MD, associate executive director for quality and research of The Permanente Medical Group.

In 2014, the National Colorectal Cancer Roundtable set a national goal of screening at least 80 percent of those eligible by 2018. Kaiser Permanente Northern California achieved the 80 percent screening rate by 2011. The Kaiser Permanente FIT-based outreach program, combined with colonoscopy, has become a model for similar programs to maximize the number of people screened in the United States, the Veteran’s Administration and internationally.

“Screening markedly decreases deaths from colorectal cancer and enables people to live healthier lives,” Dr. Corley said. “The future of colorectal cancer research and care is furthering proven ways to increase screening rates; better understand the best ages to start, repeat and stop screening; and continue to improve the ease and effectiveness of the tests themselves.”