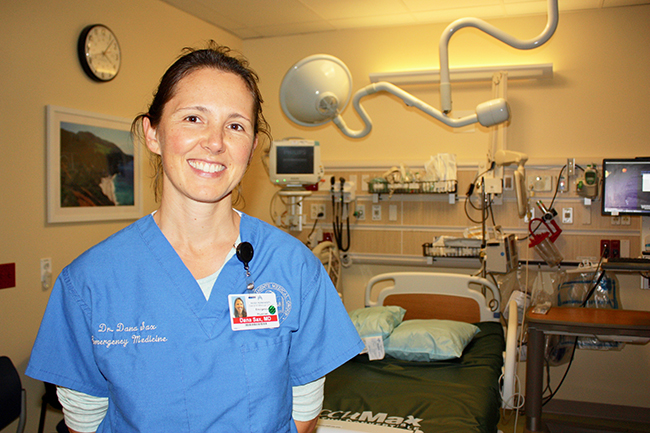 Research led by Dana Sax, MD, found that tele-triage of chest pain can safely refer people for care in venues other than the Emergency Department.

When the phone rings at Kaiser Permanente’s Northern California advice and call center, the person on the other end of the line may be experiencing chest pain.

Should that person go straight to the nearest Emergency Department, or is it safe for them to receive care another way?

“Careful and timely evaluations of chest pain are critical, as missing or delaying the diagnosis of a heart attack can have devastating consequences,” said Dana R. Sax, MD, an emergency physician with The Permanente Medical Group who’s based at Kaiser Permanente’s Oakland Medical Center.

Chest pain is the second-leading reason why people show up in the Emergency Department. It accounts for about $5 billion of the $80 billion spent annually in the United States on emergency care, according to the Agency for Healthcare Research and Quality.

A new Kaiser Permanente study led by Dr. Sax, published in the December Health Affairs, finds that “tele-triage” of patients with chest pain over the phone can safely and effectively direct people to the right place for receiving care.

“We found that telephone consultation with a nurse or physician can be used to safely and effectively triage patients with chest pain,” said Dr. Sax, the study’s lead author. Dr. Sax presented the findings this week at a Health Affairs briefing on telehealth in Washington, DC.

When physicians take the call

Kaiser Permanente members in Northern California can call the Appointment and Advice Call Center 24 hours a day, 7 days a week, with trained nurses and on-call emergency Permanente physicians available at all times to tele-triage health concerns. The free service receives over a million calls per month from members seeking advice and to make appointments.

This change gave researchers the opportunity to compare chest pain calls directed initially to nurses with those referred to physicians.

Overwhelmingly, patients followed the provider’s recommendation about where to receive care, although the rate was slightly higher for physician-directed calls (86 percent versus 82 percent).

Regardless of who people with chest pain spoke with, there were no significant differences in adverse outcomes within a week and a month, including death.

Tele-triage in an integrated health-care system

More often than not, the researchers found, the right place to care for chest pain is outside of the Emergency Department.

“Out of about 23,000 complaints chest pain received by Kaiser Permanente’s Northern California call center in 2013, nearly 9 out of 10 were referred to venues other than the Emergency Department for care, such as home care or an appointment or telephone visit with their primary care doctor,” Dr. Sax said. “Among those who were referred to the Emergency Department, 4 out of 5 were discharged after an evaluation without being admitted to the hospital.”

Senior author Mary E. Reed, DrPH, a research scientist at the Kaiser Permanente Division of Research who studies telemedicine, noted that integrated health care settings like Kaiser Permanente may be the ideal environment for tele-triage.

“We found that the physician-led tele-triage was not only safe but efficient. The technology in this setting offers the unique opportunity for callers to hear advice from physicians who have the patient’s full electronic health record at hand in order to inform their recommendations,” Reed said.

With quick access to the patient’s electronic health record, emergency physicians may feel more comfortable referring patients with chest pain to a place other than the Emergency Department for care, said study co-author David R. Vinson, MD, emergency physician at Kaiser Permanente’s Sacramento Medical Center and physician researcher at the Division of Research.

“Chest pain is a major contributor to overcrowding in U.S. emergency rooms,” Dr. Vinson said. “Emergency physicians know from first-hand experience that the vast majority of people with chest pain are not having a heart attack or another life-threatening emergency.”

The study was funded by the Kaiser Permanente Northern California Community Benefit Program.