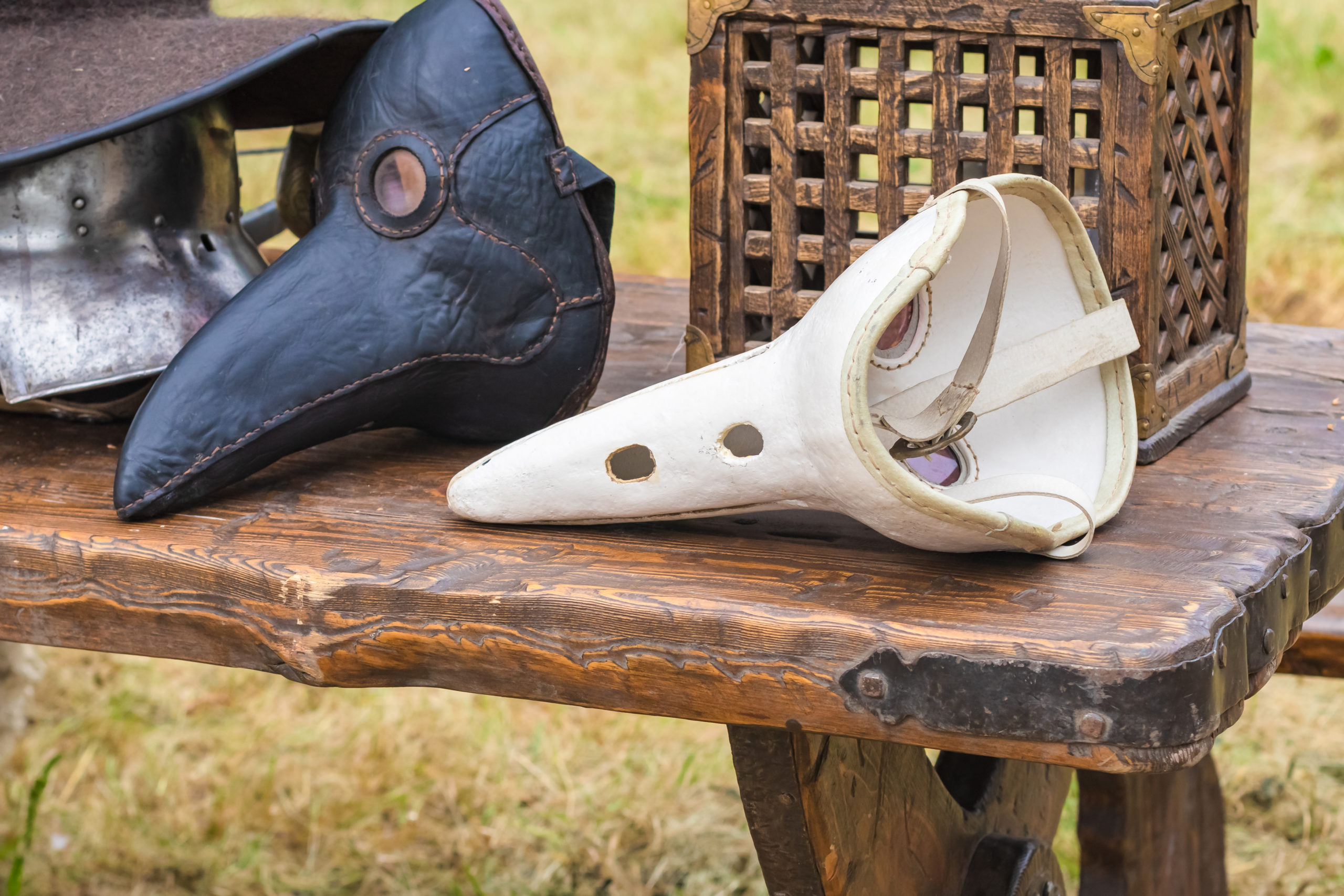 Beak masks like the ones pictured above were worn by doctors during the bubonic plague.

The 1918 influenza pandemic spread like wildfire as soldiers returned home from the Great War. About a third of the world’s population was infected and as many as 100 million people died.

In the midst of that global crisis, new public health strategies to prevent the disease’s spread included anti-spitting campaigns and the cancellation of public events and victory parades. Cities that didn’t implement such measures — most famously, Philadelphia — experienced dramatically worse outbreaks.

A review of the history of pandemics — from the bubonic plague to the 1918 influenza pandemic to COVID-19 — shows how infectious disease outbreaks have been the drivers of transformation and innovation in public health, and how care is delivered. While the Permanente Medical Groups have provided care during outbreaks of AIDS, SARS, bird flu, and other highly infectious diseases, we’ve never experienced a global pandemic firsthand until now.

Even as we continue to manage the outbreak, we are always thinking about what the American health care system might look like when we get to the other side. How will this new coronavirus change our understanding of how to treat and prevent the spread of disease, and how will it transform the way health care is delivered in the United States?

Human beings have always turned to healers for physical and spiritual guidance. But it wasn’t until repeated occurrences of bubonic plague throughout the Middle Ages that the first dedicated European hospitals and religious orders were established for healing the sick. In the late–17th century several European cities appointed public authorities to adopt quarantine measures. In the 18th century they established private hospitals and mental institutions.

The Great Sanitary Awakening of the 19th century was a response to outbreaks of cholera and other infectious diseases, as “filth” was understood to both cause and transmit disease. Communities and governments embraced cleanliness, which led to widespread public improvements including sewer construction, public water supplies, housing regulations, and paved roads. Dr. John Snow’s firsthand observations of how cholera spread among British miners during the outbreak of 1831 to 1832 led him to found the modern science of epidemiology.

Even as we continue to manage the outbreak, we are always thinking about what the American health care system might look like when we get to the other side.

In May 2020, the medical community celebrated the 200th anniversary of the birth of Florence Nightingale. In the mid-19th century, Nightingale led a team of 38 nurses to tend the British army during the Crimean War. After her team cleaned up deplorable sanitary conditions in the military hospital, death rates dropped from 32% to 2% within 6 months. She was subsequently hailed as the founder of professional nursing and modernized hospitals.

Science in the service of public health

Late in the 19th century, rapid advances in scientific knowledge about the causes and prevention of disease led to the “germ” theory of disease and the first applications of science to protect public health.

The French chemist Louis Pasteur showed in 1877 that a bacterium was the cause of anthrax and developed a vaccine within a few years. By the 20th century, scientists were learning about the causes of contagious diseases like tuberculosis, polio, diphtheria, typhoid, and yellow fever, and finding vaccines to control them. The World Health Organization reports that licensed vaccines are now available to control about 2 dozen infectious diseases, and an equal number of vaccines are in the pipeline.

The 1918 influenza outbreak occurred at the cusp of transformative leaps in science, epidemiology, medicine, and public health. Because so many of its victims were middle- or upper-class and young, the pandemic finally put to rest the longstanding misconception that infectious diseases only happened to poor, weak, disabled, and so-called “degenerate” people.

In the aftermath of the 1918 influenza pandemic, many governments around the world embraced the concept of “socialized” medicine — the idea that all people have the right to access health care. The U.S. government’s central role in public health and welfare was codified in the 1930s with the New Deal, which guaranteed health care for seniors and people with disabilities and launched the Social Security system.

The World Health Organization reports that licensed vaccines are now available to control about 2 dozen infectious diseases, and an equal number of vaccines are in the pipeline.

At the same time, upper-class people with the highly infectious “white plague” — tuberculosis — were retiring to sanitariums to recover while poor people suffered at home and continued to spread the disease in their communities. Throughout the 20th century, many sanitariums evolved and grew into today’s medical centers, as government regulations began requiring the more equitable treatment of the disease.

By the mid–20th century, modern epidemiology was being applied to infectious disease, and contact tracing was systematized in municipal and county public health departments to prevent diseases from spreading locally.

The AIDS epidemic of the 1980s sped up the development and distribution of new treatments, while the SARS and Ebola outbreaks of recent years have led to public health advances in disease control, diagnostics, and patient and survivor care.

How will COVID-19 transform health care?

Amid the loss of life, economic hardship, and emotional damage of COVID-19, what lessons will we take away from this pandemic, and how will health care be transformed when we get to the other side?

The COVID-19 pandemic has provided us with the opportunity to consider options for health care that might have been inconceivable a year ago. Out of this crisis, will we emerge with a smarter, more equitable, and accessible health care system?