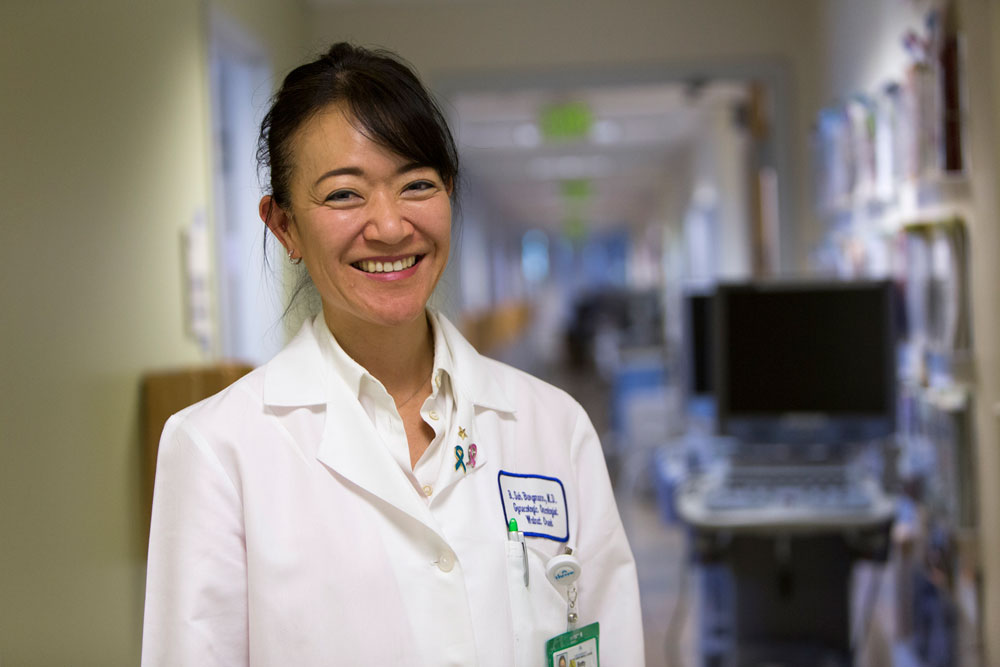 Betty Suh-Burgmann, MD, figured out a better way to assess the risk of ovarian cancer in masses found by ultrasound, allowing women at low-risk to avoid exploratory surgery.

Novel Process Created for Categorizing the Risks From Ovarian Massess

Permanente physicians have come up with a novel new way to read ultrasounds, which allows them to correctly identify which ovarian masses are most likely to be cancer.

A study published this week in the journal Obstetrics and Gynecology validates an original new process for reading ultrasound scans, developed by Elizabeth (Betty) Suh Burgmann, MD, and Permanente gynecology and radiology physician leaders, which allows them to categorize ovarian masses into different risk groups based on the mass’ size and the presence of blood flow and solid areas.

“In the past, it was difficult to determine the risk of a mass being cancerous, and which women should be recommended to have surgery to remove the mass,” said Suh-Burgmann, the study’s lead author and regional chair of gynecological oncology for Kaiser Permanente’s Northern California region. “This is the first time that ovarian cancer risk has been systematically assessed among women who have ovarian cysts or masses detected during routine care.”

Ovarian cancer is difficult to treat successfully in its later stages, but outcomes are good when it is found early. With the new radiology guidelines, women at higher risk for ovarian cancer can be promptly referred for surgical evaluation while women at low risk can safely avoid surgery.

Study co-author Tracy Flanagan, MD, director of women’s health for Kaiser Permanente Northern California, said that having a standardized system “allows us to target women at higher risk for further evaluation while helping to avoid unnecessary surgery for women at low risk, and analysis of the data also helps us improve the system over time.”

The study, “Prospective validation of a standardized ultrasonography-based ovarian cancer risk assessment system,” was based on nearly 44,000 pelvic ultrasounds not related to pregnancy that were done in Kaiser Permanente Northern California in 2016.

The risk of finding an ovarian cancer among the nearly 37,000 women with normal ultrasounds was extremely low: 0.1 percent, or 1 in 1,000.

“Having a better estimate of risk helps doctors and patients make better choices about whether it makes sense to do surgery to remove the mass, versus monitoring it with repeated ultrasounds,” Suh-Burgmann said. “We hope that other health care organizations will consider adopting this validated system.”

“A place where doctors can do this.”

Dr. Suh-Burgmann has conducted research on gynecological cancers throughout her medical career. She is a member of the inaugural class of the The Permanente Medical Group and Division of Research’s Physician Researcher Program, which supported this study.

“Dr. Suh-Burgmann knew she could help the broad medical community do a better job with ovarian masses, and she doggedly built the partnerships she needed to implement this program, then evaluate it using data from the electronic medical record,” said senior author Lisa J. Herrinton, PhD, research scientist with the Kaiser Permanente Division of Research. “Kaiser Permanente is a place where doctors can do this.”