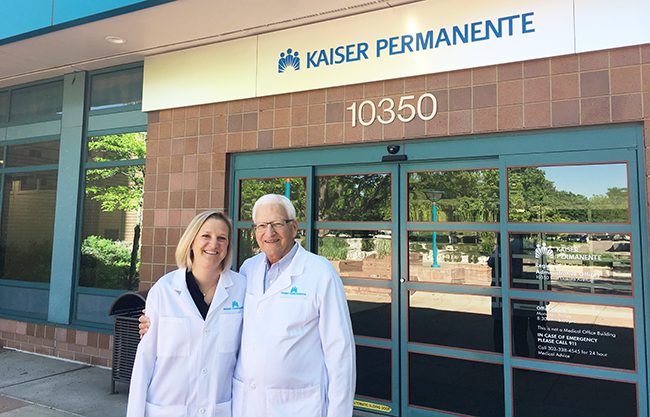 Father-Daughter Pediatricians Dedicated to a Lifetime of Keeping Children Healthy

Megan Lederer, MD, never thought she would be one of those kids that followed in the footsteps of their parents. But while contemplating her future in college, she recalled how her father, pediatrician Robert Lederer, MD, had a deep satisfaction for his work.

“What I remember from growing up with him was that he was happy at work,” she says, referring to her father’s practice at Kaiser Permanente Colorado as a doctor with the Colorado Permanente Medical Group (CPMG). “When I visited him there or was being seen at the medical offices, I felt the warmth and family feeling of the staff that he worked with and from his colleagues as well.”

Dr. Robert Lederer spent his whole career with CPMG, from the time he completed residency in 1971 to his retirement in 2014. Along with caring for pediatric patients, he was also physician-in-charge at the Kaiser Permanente Franklin Medical Offices and served on the CPMG Board of Directors. Still, it was his work with patients that he found most rewarding.

“We both have wandered into administration at Kaiser Permanente in our early careers,” he says, “but we truly find the joys are in seeing your panel of patients, which is far in excess of any rewards in administrative work.”

The Importance of Mentors

A piece of advice Robert Lederer had for his daughter and for anyone considering medicine is to find a mentor who “truly enjoys what they do and try hard to understand why.” He says that when he was caring for patients in central Denver, it gave him the opportunity to see a diverse population. “This spectrum was very important to me personally, and also very rewarding.”

I often meet people who have been with Kaiser Permanente for many years. When they hear my name, they light up as they tell me how much they loved working with my dad. He has left big shoes to fill.

This also made him the perfect mentor for his daughter. “I remember lots of patient stories from growing up,” Dr. Meg Lederer says, “both happy and sometimes sad, which showed how much he deeply cared for the kids that he saw.”

Dr. Robert Lederer says he’s especially proud of his daughter’s dedication to her patients. In fact, he notes that she would rather continue a 40-minute commute to her current offices even though there are other facilities closer to home – because she loves her patients and co-workers so much. His daughter says that’s the same feeling his patients have for him.

“My dad is a universally beloved person in this organization,” she says. “I often meet people who have been with Kaiser Permanente for many years. When they hear my name, they light up as they tell me how much they loved working with my dad. He has left big shoes to fill.”

Dr. Meg Lederer says she approaches caring for her patients by bringing an understanding, patient, and realistic approach to their questions and concerns. “As a busy mom myself, I also try to show as much empathy as I can as these parents share with me what is going on with their most precious possessions – their kids!”

The youngest of three children, she is the only one that pursued a career in medicine – a special connection she shares with her father. Even though he’s retired, they still talk about medicine when they get together, often reflecting about the changing profession but also sharing patient stories and maybe a bit of advice. “Medicine can be like a foreign language,” Dr. Meg Lederer says, “and it’s not unusual for the two of us to be talking and my mom and my husband, both not in medicine, will have to remind us that they have no clue what we are talking about.”

Dr. Robert Lederer says one of the rewards of retirement is seeing his patients grow up into adults. “I still correspond with several of my former patients,” he says, “and I take pride in their accomplishments, especially when I see them as good parents as well.”