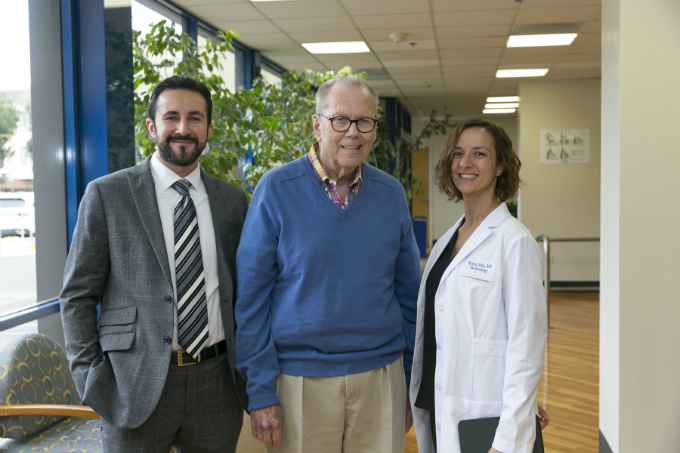 For Richard Williams, the past 20 years have not been easy. He was diagnosed with Parkinson’s disease and essential tremor in 2004. Through the years, his symptoms grew progressively worse.

“Over time, my tremors really impacted my life,” said Williams, 70. “I couldn’t eat soup because it was too hard to control the spoon. It was challenging to insert a credit card into the self-service slot at gas stations. Little things became very difficult.”

Williams speaks in the past tense because those days are behind him, thanks to his care team at Kaiser Permanente.

Williams, a retiree who lives in Sonoma, Calif., receives his care from San Francisco neurologist Rima Ash, MD, of The Permanente Medical Group. Last April she came to Williams with an idea.

“I thought he was a perfect candidate for a surgery called deep brain stimulation, or DBS,” Dr. Ash explained. “Mr. Williams is in good health, tech-savvy, and he really wanted to go beyond medications to treat his tremors.”

With DBS, a surgeon implants wire leads deep in the right and left sides of the brain to emit pulses of energy. These block the brain activity causing the tremors. Next a generator much like a pacemaker is implanted below the clavicle, which is later programmed to deliver high-frequency stimulation to the leads until the target area is responding, thus improving the patient’s tremors.

Dr. Ash explained that the St. Jude device is special for two reasons: It is the world’s first wireless device available for DBS, and it has multiple segmented contacts, allowing for more precise programming, meaning that it would be that much more accurate in diminishing Williams’ tremors.

The ensuing months showed Williams the breadth and depth of care at Kaiser Permanente, tapping into the expertise of the neurologists, bioengineers, nurse practitioners, neuropsychologists, and many more. Dr. Ash would program the device, but first Patrick Pezeshkian, MD, a neurosurgeon at our Redwood City Medical Center and one of several specializing in DBS at Kaiser Permanente Northern California, would perform two surgeries.

Williams first underwent numerous physical and cognitive tests. After passing those, his case was reviewed and surgery approved by a large board of clinicians.

On Jan. 3 and 17, Williams underwent two separate six-hour surgeries. He was awake for almost all of it, with physician assistant Diana Bruce coaching him, until the final hour, when the generator was placed in his chest.

“During the surgery, Dr. Pezeshkian had me draw circles and lines, which were just terrible,” Williams said. “But when he first tested out the working leads during surgery, I could draw perfectly. All I could say was, ‘Wow.’ I almost cried.”

Williams recovered well, and began the series of programming sessions with Dr. Ash in San Francisco. Using her iPad, she meticulously tests each of the leads, their different combinations and strengths, in her pursuit of the best setting.

“In the first session, we found a sort of medium spot for just a baseline,” Williams said. “Right afterward I went to lunch with my wife and youngest daughter and was suddenly able to hold a glass of iced tea with one hand, steadily. I can’t remember the last time I could do that!”

Since then, Dr. Ash has taught Williams how to use an iPod to control the leads himself. He turns it on when he wakes and off again at bedtime.

“I can’t say enough about the professionalism and skill of my doctors and their ability to do incredible things,” Williams said.